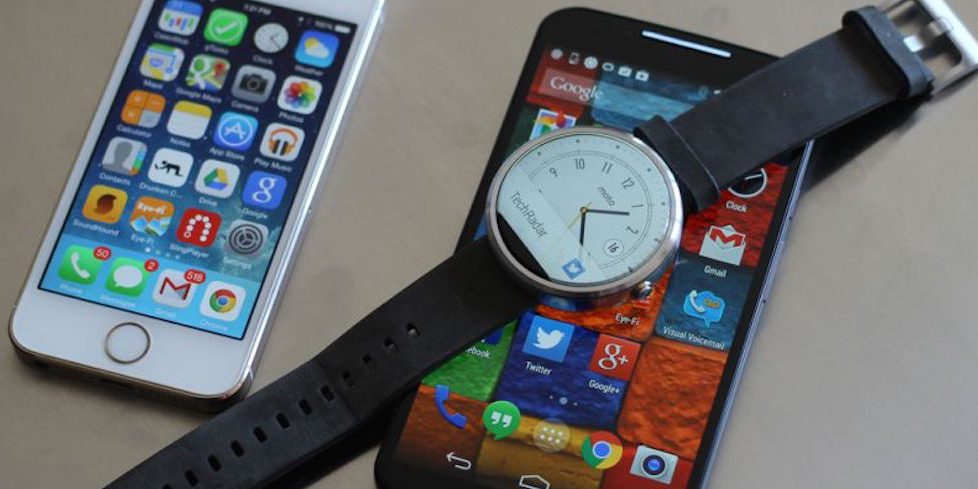 In the field of innovation with respect to mobile technology, smartwatches are the “in” thing. These gadgets make the lives of mobile users easier by displaying the notifications and alerts right on the users’ wrist. This keeps them from being derailed from an important task or conversation by having to fish their smartphones out of their pockets at the slightest buzz. In August 2015, it was announced by Google that Android Wear smartwatches, its wearable, portable software launched in 2014, would now be able to be paired with Apple iPhones. This is a rather surprising spectacle in the technology industry, since iOS and Android have been fierce competitors since the advent of smartphones.

Why Have Google And Apple Decided To Collaborate?

Before this historic move, Android Wear was only available on Android-supported smartphones made by vendors like Samsung, LG, Motorola  and others. But now, by collaborating with iPhone, Google has just tapped into a massive, lucrative market of iPhone users where Apple sold 47.5 million iPhones in just the second quarter of 2015. Google hopes to make its smartwatches more widely usable by offering iPhone users another viable option other than the Apple watch, a strategy whereby it hopes to stabilise the shaky starting sales of its Android Wear. From the perspective of Apple, the motivation is far more aggressive than that of Google’s: competition. This compatibility between the two devices will bring Google into direct competition with Apple more than ever before, a scenario that supports the ruthlessly competitive nature of Apple. Since the launch of Android Wear in the past year, it has not been able to catch a strong traction in the market. Apple hopes to further expose the limitations and shortcomings of Android Wear compared to its own watches to secure customer loyalty.

When we look at the numbers, Android powered smartwatch manufacturers collectively sold 720,000 units out of a production of 4.6 million, according to market research firm Canalys, while 4 million units of Apple Watch were sold, beating the company’s internal projections. While both watches entered the market in the same year at around the same time, Apple seems to have already skimmed a majority share of the market, making it the most popular smartwatch in the world. Google, on the other hand, is still struggling to convince customers to put a mobile computer on their wrists.

Finally, Apple Pay works only on iPhone 6, iPhone 6 Plus, iPad Air 2 and iPad Mini 3, which means it’s not compatible with Android wear yet. Same is the case with Android Pay not working on iPhones. It would be futile to speculate as to when Apple Pay and Android Pay would be able to work on Android Wear, as no concrete promises have yet been made by either Apple or Google to facilitate their users in this regard.