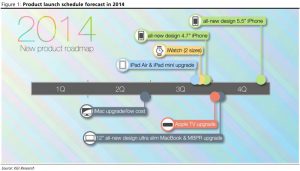 I don’t think a week has gone by so far this year without some kind of new rumour or suggestion about what Apple is going to be launching next.  I’ve been keeping a close eye on all of these rumours and, quite helpfully, a full list of the rumoured products (an Apple Product Roadmap) for this year was released by KGI securities analyst Ming Chi Kuo earlier this week.  Obviously this is all just speculation still, however information and predictions from this source before has generally been quite reliable.

First of all, there’s news of a low cost iMac which should hopefully be released before the end of the second quarter.  I’ll be very interested to see just how cheap this will be, considering it’s aimed to compete with Lenovo and similar brands in Asia.

Then, in quite a close together grouping at the end of Q3; an upgrade to the iPad and iPad mini, a new 4.7″ iPhone and iWatch.  In recent rumors, the iWatch will come in two different sizes (for different size wrists) have a fashionable appearance and the top of the range version will cost more than £1000.  Considering today Samsung announced that less than 4% of people are using smartwatches it’ll be very interesting to see how an iWatch fares, it could even be the push that  wearable tech needs to make it cool.

The new iPhone and iPad shouldn’t come as too much of a surprise, one comes out every September/October time.  With this though will come iOS 8, which looks like it will be coming with some pretty smart features already (Fitness Centre etc).

At the start of Q4, we can expect to see a new 12″ MacBook air and a new set of MacBook Pros.  It’s not clear if the 12″ MacBook air will replace both the current 11″ and 13″ versions or if it will run alongside them, however it’s probably going to feature a higher resolution display than before.  As for the MacBook Pro, I would imagine just minor updates.

Most interestingly is, at the end of Q4 we can expect to see a 5.5″ iPhone.  There’s patchy information available all over the internet about this rumored device, but nothing concrete yet.  It will be interesting to see how it turns out though and what sort of spec it will come with to rival the 7″ iPad mini.