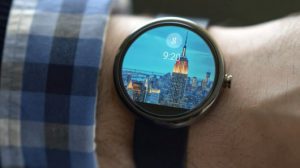 The smartwatch market is rapidly gaining traction, if your twitter feed is anything like mine, you can’t go a day without someone mentioning something about smartwatches.  However Samsung launched their Galaxy Gear smartwatch late last year to a pretty frosty reception, so something’s got to change to get people warming to the idea of actually wearing a computer on their wrist, rather than just talking about how good it would be. This week Google released this launch video to show off Android Wear and how a smartwatch will fit into your life.

The video starts off by showing you young, fun looking people doing interesting things (presumably learning from their mistakes after releasing Google Glass to pretty much exclusively tech journalists, software engineers and Robert Scoble).  It goes on to show you how you can get updates from the coastguard if there is a jellyfish warning in your area, book a cab and find out just how late you are for work.  You’ll also be able to send a text message, check the sports results and Shazam the music you’re currently hearing at a club by starting a sentence with “OK Google¢â‚¬ ¦”.  One of the most interesting features looks like the fitness tracker, something which will likely give Jawbone a run for its money and bring it into line with Apple’s (almost 100% certain) iWatch / fitness centre release with iOS 8.

It’s clear then from this video, Google are putting a lot of effort into the Smartwatch market as well as the manufacturers who will be making the hardware.  Fossil and other fashion brands are being brought in to make sure the watches look as stylish as possible, again avoiding the pit they fell into with Google Glass.  Smartwatches are being promised by LG, Motorola and Samsung although the latter will be moving away from Android with the Galaxy Gear 2 and instead launching it with their own in-house Tizen operating system.

As excited as I am to see the release of Android Wear and for the iWatch later this year, I still think it’s going to take a lot of convincing for people to either start wearing something on their wrists again.  People stopped wearing watches on their wrists pretty much as soon as they got mobile phones in their pockets, it’s going to take something really special to get them to start using both again.