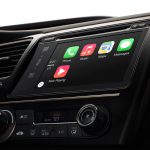 It’s been talked about for years now, but Apple have finally announced details of their proprietary iPhone to Car connection system.  It goes far beyond anything that exists for iPhone already, being a system that will allow people to not only play music, but it plans on implementing a whole ‘eyes-free’ system, making using your phone while you drive as safe as having a conversation with someone in the passenger seat.

The system works with the lightning lead (which means anything prior to the iPhone 5 won’t work with CarPlay) which is surprising, I would have expected it to all work through bluetooth – but I suppose this way you can also charge the phone while you drive.  Using the system will require you to have a brand new car from the range of selected manufacturers Apple have partnered with, there’s no information about a retro-fitting system being available at the moment.  CarPlay will work predominantly with Siri, but you’ll also be able to make selections using a large touch screen in the car.

Built in iOS services like iTunes, Contacts and Maps will be available through the CarPlay system but it’ll be interesting from a developers point of view to see how much encouragement there will be to build apps specifically for CarPlay.  There’s a huge market available here for improvements to location based services which just don’t quite work in their current form.

If you’re wondering why Apple have launched this service – it’s for customer retention.  The more you can integrate your iPhone into your daily life, the less likely you will be to switch away from it when your contract renews and you’re in a position to buy a new phone.  If you’ve bought a car because of the connectivity it has with your phone, when it comes to contract renewal time – chances are you’ll buy another compatible phone.

It’ll be interesting to see what Microsoft and Google retaliate with, considering Apple seem to have got pretty much every major car manufacturer on board with them to release a compatible car over the next two years.