App of the Week 4th November 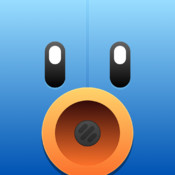 Many months ago, way back in May, we took a look at the top five replacements for Tweetdeck after the news that the app was going to be removed from the App Store.  Number four in our list was Tweetbot, a smart and intuitive app that easily let you control multiple accounts for £1.99 with no subscription.  This week Tweetbot has been relaunched as ‘Tweetbot 3’, it’s not just an update to the old app, but a complete new launch.

The first thing that you’ll notice when you download Tweetbot 3 is the complete redesign.  It’s been built from the ground up to fit in with the flat iOS 7 design standard which means crisp white backgrounds for the main timeline and block colours for all of the menus.  The other main difference you may notice between the new and the old Tweetbot is the simplification of the swipe menu to expand conversations (now it’s just swipe right to left). It’s just that feature that’s been simplified though, as far as I can see Tweetbot still keeps it’s gesture heavy navigation system and easy switching between multiple accounts, both of which always have been main draws to the app.

Other really smart additions are the custom animations and physics that makes the app bounce around the screen and images tumble away.  Apple’s new background update APIs have also been utilised meaning Tweetbot will fetch new tweets ready for you before you open the app, a great improvement over the old ‘open and refresh system’.

The new release of the app means that users will have to pay again to download it.  Some people have kicked up a bit of a fuss about having to pay again to use an app they already use just for a re-design.  I think it’s fair though, Tweetbot doesn’t rely on any kind of subscription method to generate revenue so having to pay £2 when a brand new, bottom-up design becomes available seems fair.

Overall Tweetbot 3 is great, the design and interface is much nicer than the standard Twitter app, it’s a great tool for anyone who spends a considerable amount of time using the social network.