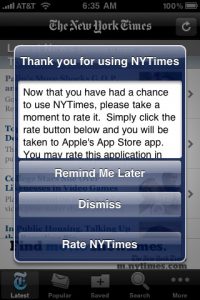 Good iPhone app marketing and reviews might be the difference between a potential user being interested in your app and then actually downloading it. Similarly, bad app reviews on iTunes will put users off, and may damage your reputation. Somewhere in the middle is having no reviews at all , this is probably just as annoying and maybe equally as damaging to how users see you and your apps as negative reviews. So what do you do to increase app ratings in iTunes?

Some developers take a somewhat shady approach, buying a few good reviews in the first couple of weeks after their app goes live to make it look like other users have loved it, encouraging others to download it and love it too. It’s the digital equivalent of a busker throwing a few coins of his own into his hat. But users aren’t going to be fooled. If your app isn’t up to scratch, they aren’t going to just jump on the bandwagon and give you 4 or 5 stars just because some other people have.

In addition, users are more and more suspicious of app reviews. If there are too many five star reviews on a terrible app, they will suspect that the developer has paid for reviews. Users will see these as fraudulent, and suspect you of trying to fool them. This can do much more damage than having no reviews or even having a couple of negative ones. So what is the real solution?

There isn’t a quick fix. It doesn’t happen by magic and you can’t just flick a switch. You really have to earn a reputation and provide people with something that they’d be happy to leave a comment about. Here are a few ways of building that reputation.

Get friends and family to help

There is nothing wrong with getting your colleagues, friends and family members to leave you a review. You aren’t paying anyone to artificially create a positive reputation around your product, you’re just asking for the advice and feedback from your nearest and dearest. Make sure to ask them to leave a totally unbiased review. Tell them to be honest, as it’s the only way you’ll learn and the only way your product will improve. This is probably the oldest iPhone app marketing tricks in the book.

Next to your friends and family, the people who will be most willing to leave you a rating are your frequent users. There are a number of iPhone app marketing SDKs which can be added to your app asking a user for a rating, such as Appirater, which also allows the developer to customise the prompt.

Where this prompt appears depends on what sort of product you sell, what your app does and how often users will open it (and how long they spend on it). If you expect each user only to use your app a couple of times, or maybe once every couple of months, it may be a good idea to remind them to leave a review after only the second or third use. Apps which are used more regularly may do better to solicit a review after 20 or 30 uses, or a few months after download and regular use. Tailor this to your user base.

Provide an outlet for feedback

You should offer a way for user to send you feedback before they take to the reviews on iTunes. If they have had a bad experience, offer them a way to tell you directly. Many users would prefer to offer direct feedback to a genuine developer, who will then be in a better position to fix the problem, rather than leave a comment about being disappointed on iTunes.

Of course, some will still leave angry comments, so reply if you can in a friendly and inquiring manner. Be as helpful as possible, because the more you help your users, the more they help you. Respond to good feedback too. If you receive any feedback directly, such as on Twitter, acknowledge it and thank the user. It’s a quick, simple way of building interaction and that user will be happier and more likely to leave a positive review.

This might be the best way to secure good feedback. None of the other tips will work if you are offering a poor product. Update your app as regularly as necessary, fixing any bugs you have come across. Read the feedback you have received and address it in the app itself. That’s the best way of responding to you feedback. Then tell the users you have taken what they have said on board. Tell them that their input is valuable and that because of it you can offer an improved product. They will be happy that you recognised their good intentions and happy with a better product.