How can App Developers use Near Field Communication? 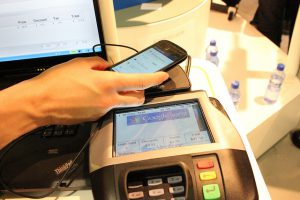 You’ve seen the adverts , file sharing between phones by bumping them together, payment for products and services with no cash, cards or even contact. What is it that is enabling this simplified use of our mobile devices, and how can app developers use it?

Near Field Communication (NFC) utilises existing radio-frequency identification (RFID) technology and creates a radio field around your phone, allowing the phone to interact and establish a connection with another device which comes near it. Previously, NFC only allowed one-way communication , such as contactless payment, but the technology has advanced so that two-way connections are possible, opening up a wide array of uses.

RFID allows you to establish a small, personal network, controlled by proximity to a home device. Once within a certain distance from the device, usually no more than a couple of centimetres, other devices join the network and can exchange data. Communication is instigated by the presence of a magnetic loop, which can be embedded anywhere and doesn’t require batteries. This means it can be placed on a sign or poster absolutely anywhere.

There are many useful applications for such a simple network. It  isn’t  the most intelligent network, open or closed only by distance, but its small size allows it to be easily controlled. This means that your mobile phone could become a simple payment option, with the Google Wallet app and Microsoft’s Windows equivalent allowing you to store your debit and credit card information and pay in store and online using only your phone.

NFC can also be used for identification purposes, in the same way as a keycard. Rather than scanning a barcode or QR code, the scanning device can simply interact with your phone, check the relevant document, and allow or deny access accordingly.

Perhaps the most everyday use, and therefore likely the most visible, is social networking. NFC will allow for easier file sharing between devices, instigated by the simple act of touching the devices together. This type of use would see more two-way interaction, with each device able to deliver and receive files to and from the other. It may open the door for app developers to create close-proximity interactivity between two devices.

A whole host of apps have been developed using Android NFC: the aforementioned payment options from Google and Windows, as well as a PayPal version; shipping information can be contained on a magnetic loop and accessed in one, simple app; and more information can be accessed on an exhibit, a menu or a product.

It must be noted that not all devices support NFC. Notably, iOS does not support the technology, with Apple claiming that they prefer not to move first with such technologies. iPhone app developers may be missing an opportunity here, due to Apple’s refusal. Should it be successful on BlackBerry, Windows and Android, and should it be utilised more in everyday life, Apple may have to reconsider their stance on supporting NFC networks.