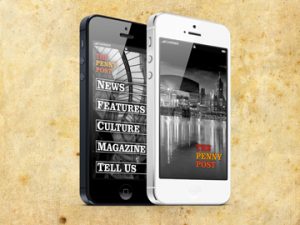 The Penny Post was “Cardiff’s locally useful magazine”. I was the proud editor of our printed publication for around two years.

I learned an awful lot about small scale media production, print and media sales during my tenure.

I learned that even with a small band of interested readers and motivated advertisers that you can build a profitable print publication in today’s digital age. The profit was too small, however. Also, since my focus as Founder of Tradebox Media is now entirely digital the time has come to retire both the print and web editions of The Penny Post. For the time being anyway.

Whilst I fully reserve the right to do an about turn and print as many Penny Post magazines in the future as I like, I won’t be doing it any time soon.

I could (and probably will) write a treatise on the ups and downs of local news and small business advertising (admit it – that sounds interesting, no?). So if that’s your bag, do keep checking our blog.

The site will remain live as there’re some great pieces on there (mostly local opinion and reviews etc). We probably won’t update the framework of the site so you will notice a degradation in the styling and functionality as updates to the back-end aren’t acted upon or implemented.

The Penny Post mailing list has over 5,000 subscribers. We’ll be using this for Tradebox and our emails will be as infrequent as ever. Generally, we’ll mail out about our newest app development projects as well as any locally relevant things that happen to cross our desks (as part of our work with CardiffStart, for example).

In a move that surely marks me as an egomaniac, I’ll be hijacking the Twitter account for my own ends. @thepennypostcdf will become my personal Twitter account which I’ll use to opine about everything and anything (but mostly business related stuff). The account has somewhere north of 3,000 followers and I fully expect to loose an awful lot of these. Immediately. To those who stick with me, I promise to be as erudite as possible (a big job) and swear as little as possible.

That’s about it for now. I wouldn’t say our journey as a company into local news is over, just on a little hiatus.